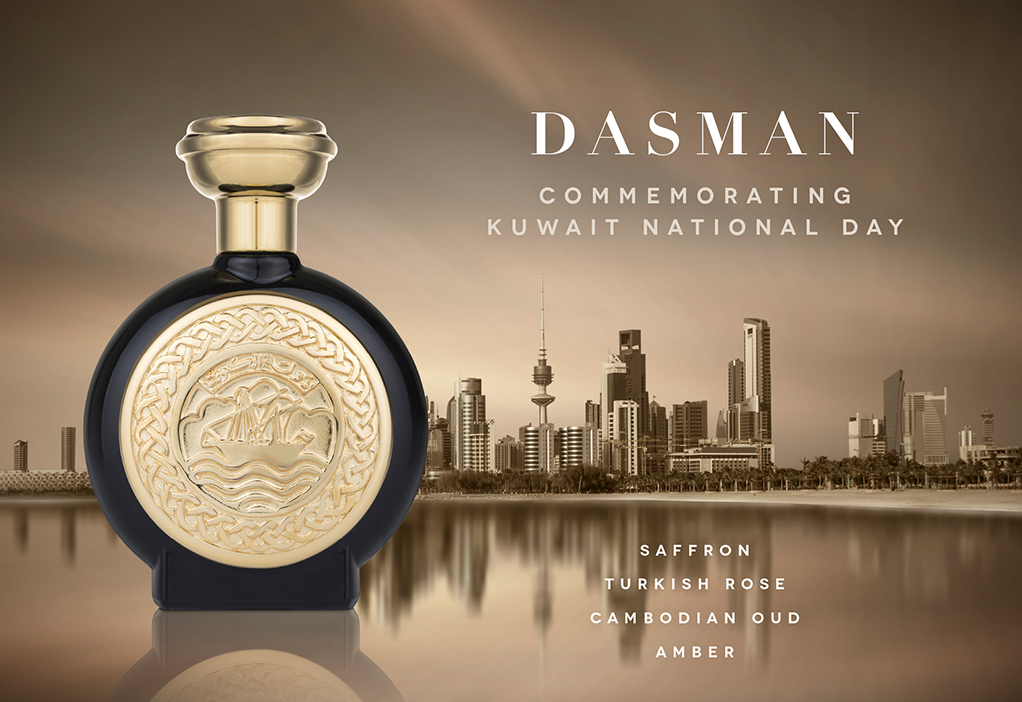 Dasman By Boadicea the Victorious perfume epitomizes the independence of Kuwait.

Creators of the world’s most evocative fragrances, Boadicea the Victorious, are launching a thrilling new scent that will celebrate the glorious achievements of Kuwait in commemoration of Kuwait National Day in February. Exclusive to Kuwait and as fiercely independent as the State itself, Dasman is supremely cultured and sophisticated, melding precious ingredients such as Cambodian oud, cypriol, neroli, bergamot and spicy saffron with the inspiring essence of roses from Turkey and Morocco. Geographically, Dasman is a promontory which juts out into the shimmering Persian Gulf – a shimmer that has been captured and beautifully bottled in a sumptuous glass flask bearing the golden image of a traditional Kuwaiti deep-sea dhow. 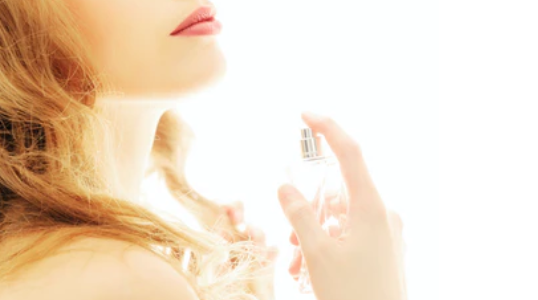 HOW TO WEAR VOLUPTUOUS PERFUMES WITHOUT ANY ERROR

Wrapping amazing perfumes for going to a party is obvious. But essence needs a technique or skill and finesse. For example- which accessory needs to be worn with casual or party wear outfit need fashion skill. Similarly, with the fragrance, olfactory emotions enchant our desire. A perfect drop of the essence with your dress will turn you on. Curb the freshness of the aroma throughout the day. Don’t worry, know you can mend the fragrance. Follow the simple tweaks in your daily life. Christian Dior, a famous perfumer, said that wearing essence and rubbing on the arm wrist is simply a wrong idea. Always memorize these steps before applying your scent.

1
Don’t rub – Mist a little perfumes
Open a fragrance with care, start processing the application of ascent. Spritz the essence in both wrists lightly but don’t rub the wrist together because when you rub the wrist, natural enzymes of our body are created, which may change the course of ascent. For the longevity of do nothing, diffuse the fragrance.

2
Store perfume according to the ambiance
Environment performs an essential role in the storage of a fragrance. Must keep the essence according to the surrounding. Aromas always evolve with the times. Unexpected chemical reactions happen according to your persona. Store a fragrance at room temperature or keep them in a box just like you store a bottle of wine.

3
Use fragrance Instantly
Use your signature essence daily. The reason, perfume should be consumed within three months because aromas diffuse with the air.

4
In doubt? Use a fragrance on your head of hair
Sometimes it is observed that we don’t satisfy with the appliance of a fragrance. When in doubt, use the essence on your hair for a long-lasting impression. Because your hair will waft wherever you go, Be the stopper of a party with the skills of luxurious perfumes. 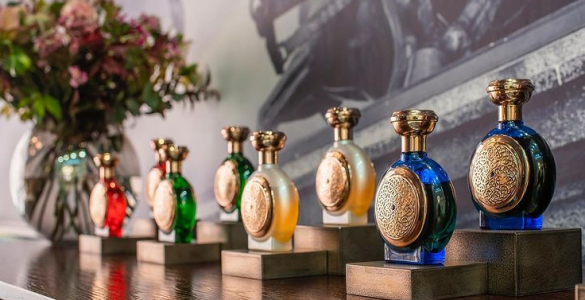 CHEER UP YOUR VICTORY WITH LUXURIOUS FRAGRANCE

It is essential to spread the signature fragrance. Always fragrance gives us a relationship in our lives. It’s an intangible spread of long-lasting fragrance tied with our memories and experiences. In my father’s daily routine before leaving the house, he used to damp the spiciness of this fragrance. He used to spritz the spicy-oriental fragrance. The creativity of the bottle since the classic time was a very distinct, timeless design infused by artisans with love and charm. I distinctly remember the Boadicea de Victorious fragrance.
The opening blast of freshness was remarkable. Its aromatic is still my favorite after so many years. From classic to the modern fragrance of Boadicea the victorious, luxury range of all collections is perfect for the prestart day. Celebrate the ultimate experience of elegance, courage, and majesty. Unmatched quality was contrived with Patchouli’s emotions.
Exotic, irrefutably British fragrance crafted for you to cheer up the victory. Make a difference in your daily monotonous life with a ravishing fragrance. Sensuous, soothing aromas will force you to think forever.
Tell your story to the world with Imperial By Boadicea the Victorious. It is a luxury perfume collection. Feel alive, empowered, and courageous with Eau de parfum. Be bold minded and magnificent with accords.

Pure perfumes leave a remarkable endurance on your skin for a long time. Believe in your fragrance and make new bonds for the wondrous moments. Always feel victorious and defeat your competitors in a race. The delightful fragrance will force you to fall in love. The luxurious fragrance will deeply impress others on their memories. Also, aromas offer great contrast with a perfect signature fragrance. Complete your wearable grace with the ultimate fragrance. Crave the feeling and enrich your fragrance wardrobe with Boadicea the Victorious‘s remarkable collection. 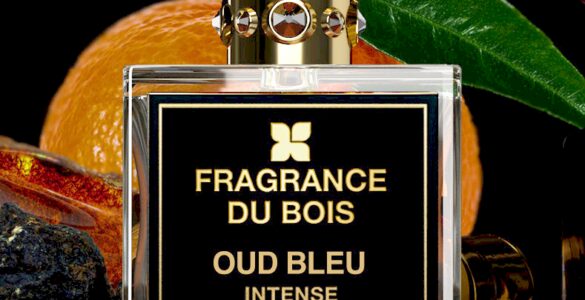 Oud Bleu Intense is given vitality with notes of sea breeze and mountain air. Rich, complex notes of woods and spices make this fragrance a dreamy spiritual experience for the senses.

A unique spicy harmony of hand-picked cardamom, nutmeg and mandarin in the top notes, infused with intoxicating frankincense, myrrh essence and warm amber in the heart. The nuances of exotic Oud then rise,
complementing a rich long-lasting base of onycha and sweet myrrh.. 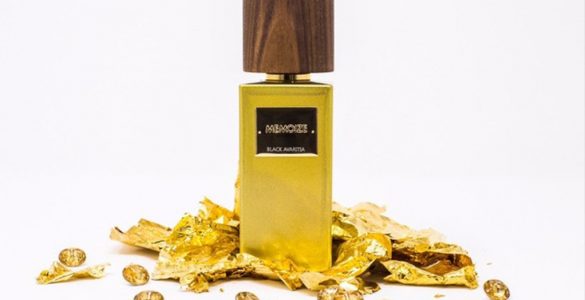 Memoize London is a luxury niche, British fine fragrance brand which launched in 2018. Evoking an emotional connection to our memories through the complexity of fragrance, Memoize London presents a collection of beautifully crafted scents, capturing the essence of the myriad of encounters we all have with life through emotions, feelings and memories. The sense of smell is one of the most powerful senses we possess, and the merest hint of something familiar can trigger a special memory or wonderful moment in our lives that we treasure for ever. Our scents take you on a thought provoking journey.

Memoize London was born of the vision of founder Holly Hutchinson. Holly worked alongside some of the finest British perfumers to develop the intoxicating scents we find in the Memoize London collection today. Taking 12 months to develop, the ‘Dark Range’ was finally ready to be revealed. The collection of perfumes were created as Unisex scents, as we believe that perfumes are not bound by gender; more by desire.

Memoize London focuses on our memories which are all evoked through scent. The name is derived from the French word for ‘memories’. This powerful connection between scent and memory is intertwined and reaches deep within all of us. Memoize London understands the importance of creating a perfectly harmonious balance between fragrances and how they make people feel, including notes that many would remember from their childhood, adolescence and beyond. These scents can create new memories, too.

BLACK AVARITIA : The essence of indulging all of your wants and needs in abundance. Travelling on a journey through rich and woody tones, this scent takes you on a journey to a foreign land. The warmth and richness is reminiscent of the sun kissing your skin.

A woody oriental fragrance leading with top notes of grapefruit and honey. A luxurious heart of ambrette, cistus, incense fusion, kashmir fusion, oud and violet, rests on a base of sandalwood, cedarwood, amber, musk, vanilla and vetiver.

Single Line Descriptions;
– The essence of indulging all of your wants and needs in abundance.
– An extrait of exceptional quality.
– Reminiscent of the sun kissing your skin.
– Black Avaritia; takes you on a journey to a foreign land.
– Black Avaritia; A woody oriental, rich and luxurious fragrance.

We use cookies to ensure that we give you the best experience on our website. If you continue to use this site we will assume that you are happy with it.OkPrivacy policy